Why is my child lying? 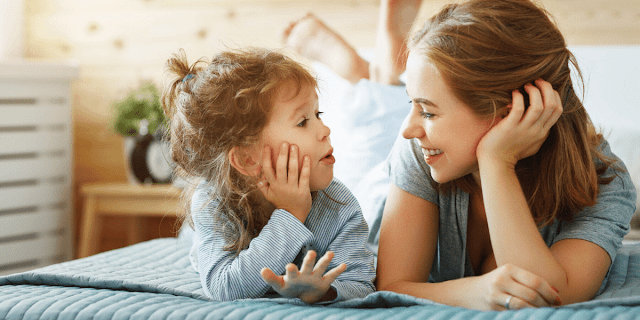 No matter how much you preach the truth, have you discovered that your child is lying? This is actually a very normal stage, not appearing until you are 5 or 6 years old.

At this time, the child understands that he can hide the truth or rather fix it. Lying is still a blur in her head, often associated with making mistakes and the fear of making mistakes.

Rather, it is around the age of 7 that the lie really takes shape. The child realizes that he can deceive others, especially by making up stories. He also realizes the difference between good and evil, but also between the imaginary and the real.

How do I react to my child's lies?
When you know your child is lying, can't you talk to him? Don't let him get into a false spiral. Do not hesitate to come back to big or small lies to talk together. Either way, if they manage to confess, always praise your child for telling the truth.

Try to be as blameless as possible about lying. Do not try to lie or hide certain truths. And, depending on the child's age, you can give them concrete examples from your daily life, explaining that the truth is not always easy to confess.

As long as the lie does not become pathological, there is no need to worry. Instead, learn to interpret the meaning of his lies. By lying, a child may simply want to express a lack of attention, a certain loneliness or a real state of unhappiness. It is all these causes that should alert you as a priority, more than the lie itself. Because if the child knows very well how to use lies to keep his own garden a secret or even to provoke his parents when tensions are there, this is not the most important.


4 causes for lying in children
Different causes allow us to understand how the mechanism of lying is gradually put in place in children. Here are different factors, which can help you explain and reduce your child's lies.

1 | Your child is afraid of being punished
When the child understands that he can avoid punishment by lying, he instinctively wants to try. By making him fear possible punishment, an adult may unwittingly encourage a child to lie. And to avoid punishment, the child uses all the arguments to justify himself, such as the famous phrase "it is not me" or "it is not my fault", while he is alone in the process. play… Try to lighten the punishments to make it easier for him to tell the truth.

2 | A truth difficult to confess
It is not always easy to face it. Sometimes certain emotions are difficult to share. When reality is too difficult for a child to express, he may want to lie. This lie should in fact be interpreted as loneliness in the face of his feelings. He then cannot find solutions to overcome them. The lie becomes a kind of refuge. This discomfort can in some cases be serious and it should not be taken lightly. Only dialogue will allow your child to free himself from these weights. Sometimes it is taboos like money or death.

3 | The pleasure of creating
We must also see lying as a form of freedom of expression. For some children, the possibility of lying is a bit like making an artistic creation. And while the magical and imaginary universe is very present in childhood, little ones do not see a real problem in lying. If your child can tell great stories, they should slowly learn to tell the difference between fiction and reality.

4 | The need to value yourself
Your child can also lie for a better integration, with friends in particular. He then enters into a role play and makes his small arrangements. If it is appropriate to explain to the child that you understand why he is doing this, once again give him the keys to properly differentiate the truth from the imaginary. Keep in mind that these lies help to put yourself forward and draw attention to yourself.
Facebook Twitter